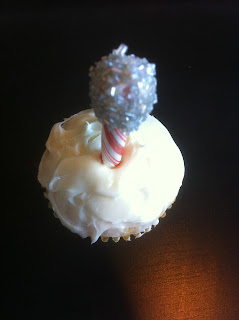 The other day I came across a post about North Pole cupcakes for Christmas and instantly thought it would be awesome to adjust the idea to make South Pole cupcakes that resemble the Ceremonial South Pole, which is red and white with a silver mirror style round top.  It took me several days and seven stores before I finally located some regular candy canes (last box at 2nd Target I went to!).  I almost thought about paying ridiculous prices to buy them online because I did not want to wait until next year to make the cupcakes.

To make the South Pole cupcakes, I started by making this Peppermint Vanilla Cupcake Recipe.  If desired, you could also use the frosting recipe there, but I only like cream cheese frosting.  I used this recipe, but I substituted one of the teaspoons of vanilla extract with peppermint extract to make peppermint cream cheese frosting.  I also only used 1.5 cups of powdered sugar, since I do not like it too sweet.

For the actual South Pole that I stuck in the cupcakes I broke off the hook part of the candy cane to end up with just peppermint sticks.  I dipped the rounded end of the stick into melted white chocolate and then dipped it into a bowl of silver pearlized sprinkles (Wilton brand purchased at Michaels craft store).   This did not work out too well when I put it straight into the cupcakes, but it did if I put them on a plate and let the chocolate harden before putting it in the cupcakes.  I also did a few using the frosting instead of white chocolate and that actually worked out much better and could be put straight in the cupcakes without it drooping down.
Posted by wildcat1001 at 4:12 PM