The Emperor Penguin that was found in New Zealand earlier this year will soon be leaving the Zoo to begin its journey to freedom.  The penguin has become nicknamed Happy Feet after the popular cartoon movie that has a sequel coming out soon.  On Sunday, August 28, 2011, Happy Feet will be transported to the NIWA research vessel Tangaroa. The vessel is headed towards Antarctica and will release Happy Feet just east of the Auckland Islands.  A special tracking device is on Happy Feet that will allow his location to be known at least until next April when he molts.

Learn more about this here.

The National Science Foundation (NSF) has reached an agreement to use the Russian Icebreaker Vladimir Ignatyuk.  The icebreaker will be used for the major annual resupply and refuel mission that provides the main supplies that McMurdo needs to operate at its current capacity throughout the year.  The icebreaker will be used to lead the ships that resupply and refuel the base through the ice.

Previously, the NSF used a Swedish icebreaker, but recently the Swedish government decided it needed to keep the icebreaker up north.  The NSF and Murmansk Shipping Company have signed a multi-year contract to use the Vladimir Ignatyuk at least until the U.S. Coast Guard Polar Star is done with its major relift in 2014.

This winter there will be an extra special Antarctic tourist cruise among the tourist cruise offerings.  This cruise is through One Oceans Expeditions and involves fulfilling Frank Wild's last request, which was to be buried next to Ernest Shackleton.  Shackleton is buried in a whaler's graveyard in the South Georgia islands.

The cruise is special in that it involves taking the ashes to their final resting place while also attempting to visit the famed Elephant Island where the crew of the Endurance were eventually rescued from.  Also, descendents of Frank Wild as well as Shackleton's granddaughter, Andrea Shackleton, will be on the cruise.   It also includes the regular Antarctic peninsula type destinations.

What do Texas and Antarctica have in common?

Learning about the supercontinent Pangea is a regular part of grade school science class.  However, the continents have moved around and have been connected in different ways over the Earth's history.  Some of the most recent research shows that one of the past connections involved Texas and part of Antarctica being next to each other.  Evidence that links the two based on rocks with the same lead isotopes composition in the Franklin Mountains of Texas and the Coat Lands of Antarctica.  These rocks are part of the evidence to prove the theory that North America and East Antarctica were once connected as one supercontinent called Rodinia.

Learn more about this topic here.
Posted by wildcat1001 at 3:57 PM No comments:

Email ThisBlogThis!Share to TwitterShare to FacebookShare to Pinterest
Labels: news 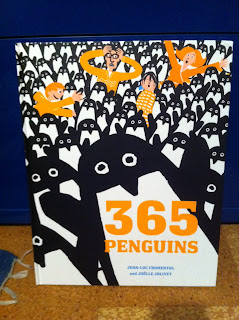 365 Penguins by Jean-Luc Fromental is a funny picture book about a family getting a penguin in the mail every day.  In the end it is revealed their uncle mailed them to them as a way of smuggling them out of Antarctica.  Of course, it is an illegal thing to do, but the book addresses that and has a message of climate change and protecting the natural environment.

Overall a great book for all ages.  The big size also makes it great for group storytimes.

The Tohoku Tsunami that is known for the damage it caused in Japan in March 2011 has been found to also caused iceberg calving in Antarctica.  Satellite imaging was used to follow the progress of the tsunami waves all the way down to Antarctica where the consistency of the 1 foot waves was still enough to cause icebergs to break off the Sulzberger shelf.  Often there are calving events and then scientists try to figure out the cause, but for the first time they were able to prove that tsunami waves are one cause of iceberg calving.

Learn more about this news here.
Posted by wildcat1001 at 2:42 PM No comments: